Today 10 years ago NBC aired Friends season 10 finale which was also the series finale in a two part episode titled: The Last One.

Here are some Fun Facts about this iconic Friends’ episode that set our favorite friends Monica, Chandler, Rachel, Ross, Phoebe and Joey in a new chapter in their lives.

Friends’ The Last One: Fun Facts 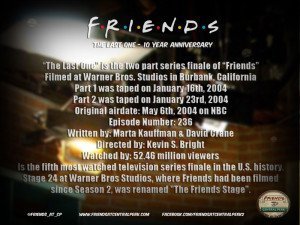